“The attitude in the workshop is great. Everyone’s really friendly and gets along. I feel comfortable and happy, and I know there’s a future here. I’ve even recommended the apprenticeship to one of my mates, and now he works here too. He loves it – and it’s always good to welcome more people.” 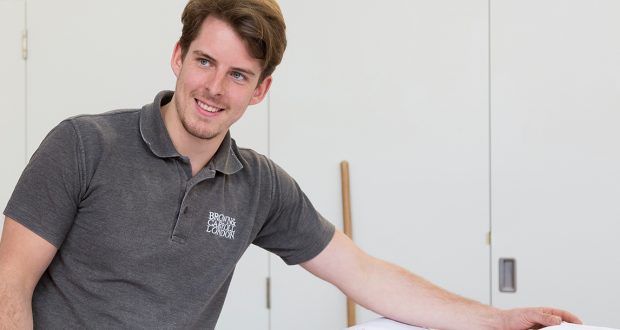 David came to Brown & Carroll in 2012, having learned about our apprenticeship opportunities form his father, Peter (our Head of Estimating).

“I’d studied a graphics course at college and was working in a part-time job. However, I wanted a full-time job and knew this was the industry I wanted to be in – so an apprenticeship was the next step.”

David completed his NVQ Level 2 in Carpentry and Joinery before moving straight on to his Level 3 training.

“All the support was really good. Everything I needed to complete for college – all the tasks I needed to do and goals I needed to hit – I had help with. I knew that I could always speak to Mike Pearson or Gavin Mills for any help I needed with my work-based evidence. I was helped all the way through.”

“The apprenticeship helped me build a lot more confidence. It also gave me an idea of where my career could go in the future. I wouldn’t mind going into setting out or CAD design – but I’ve still got lots to explore.”

One highlight of David’s training was when he represented us in the Worshipful Company of Joiners and Ceilers Craft Competition – and won! The competition involved completing a project in a day from a set of drawings. Although he was given two weeks’ practice time in advance, David only had 8.5 hours at the competition. His skills and talent were put to the test against the 28 other entrants, but his efforts paid off when he was awarded first place.

Since qualifying, David has continued to work with us as a Bench Joiner, and is looking forward to seeing his career develop within the company.

“A lot of the days can be similar when you’re working on a particular job, but then a new job comes through and everything changes. And when you finish a job, you think, “That’s quite impressive!” It’s a real sense of achievement.”