“The support throughout my training has been great – everyone has been really accommodating and really helpful. Brown & Carroll have been great at giving me opportunities and helping me to grow. It’s a diverse company full of very receptive, incredible people.” 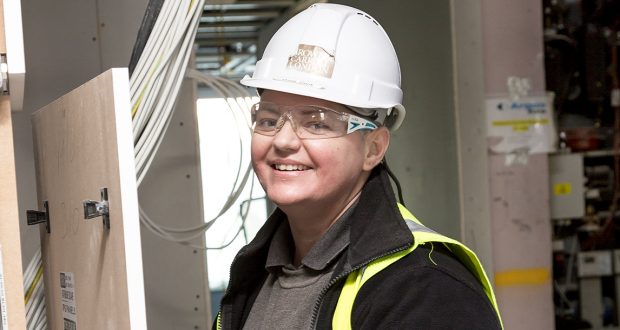 It was the desire for a career change that brought Marie to Brown & Carroll. She joined us in 2015 from a previous career as a chef manager. Marie, who had always been ‘DIY-minded’ and loved creating things with her hands, initially thought about becoming a plumber. However, after a 13-week multi-skills course, she knew an apprenticeship in Site Carpentry was the right path for her.

As one of the 1% of onsite construction workers who are female, Marie is something of a novelty on the building site. However, she found her preconceptions of what life would be like for a female site carpenter quickly dispelled.

“You have this stereotypical picture of what it’s like on a building site, but it really isn’t how things actually are. All my colleagues have been immense. I’m willing to muck in and get on with it just like everyone else, so now I’m just seen as one of the team.”

Marie has completed her NVQ Levels 1 and 2 in Site Carpentry, and is now exploring progression to Level 3.

Marie is one of a number of women entering the traditional ‘male’ trades, bringing about benefits for the whole industry. In fact, she recently inspired a 20-year-old woman to take up carpentry after speaking at an event.

“Women bring different skills and thought processes to the job, which can be an advantage when problem solving – and even having smaller hands has occasionally come in useful!”

The most satisfying part of Marie’s apprenticeship, however, has been the opportunity to always learn.

“When a new task comes along, I learn something new. Then, once I’m left to do it on my own, my confidence just grows. It’s a real sense of pride and satisfaction.”