Google needs no introduction. Renowned for its originality, the technology giant’s new headquarters were going to be anything but ‘ordinary’. Spanning 11 storeys, 6 St Pancras Square now offers a remarkable home for Google engineers (aka Googlers), complete with a running track, massage rooms, and even teaching kitchens! 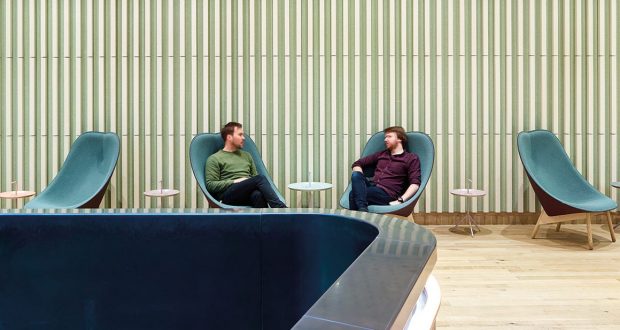 With a brief of this kind, we anticipated some unusual challenges, but our team took everything in their stride. One such challenge was design refinement and construction of the Jack rooms – Harry Potter-esque ‘Rooms of Requirement’ based on a Google concept of flexible, sustainable office space.

With 160 Jack rooms to complete, this task called for special measures. An additional 7,000 squared feet and a dedicated team at Laindon increased our capacity, but with an unbelievable 460,379 individual parts to process, their job was a demanding one. The response was, however, slick and composed; up to four deliveries were made to the site each day, where ready-and-waiting assembly teams jumped into action.

All the while, Matt Cook expertly managed the rest of the major fit out, while any onsite modifications were handled skilfully by Subs Gopal. Googlers now encounter our joinery on every floor, whether they’re working, drinking coffee, or taking in the roof terrace.

We also completed two floors for YouTube, comprising a number of studio spaces. Despite a demanding brief and a number of unforeseen changes, our service and proactivity from Day One were key to completing this spectacular project. That, and nearly half-a-million Jack parts! View our full case study here >