Wood gets the royal seal of approval

Luke and his partner with Master Carpenter Michael Neal and HRH Princess Royal. 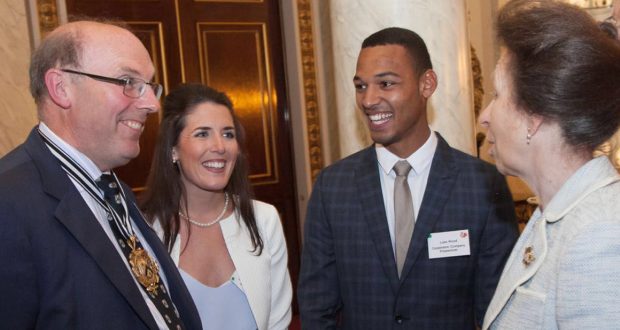 With a name like Luke Wood, it seems carpentry was his destiny and our bench joiner has certainly excelled in his profession. He recently attended Buckingham Palace to be presented with a prize by HRH the Princess Royal, the current President of The City & Guilds of London Institute.

Designed to recognise and reward excellence, these prestigious awards take place annually, with winners nominated by their respective Livery companies, who were the original founders of the City & Guilds organisation.

Luke was put forward by the Worshipful Company of Carpenters after five years of outstanding achievements, while studying for his NVQ Level 3 Diploma at The Building Crafts College in Stratford, East London.

“It was a great honour to have my achievements recognised, especially as only a handful of people were nominated. Not many people get to visit the Palace and meet the Princess Royal, so it was a fantastic experience that made all the hard work worthwhile.”